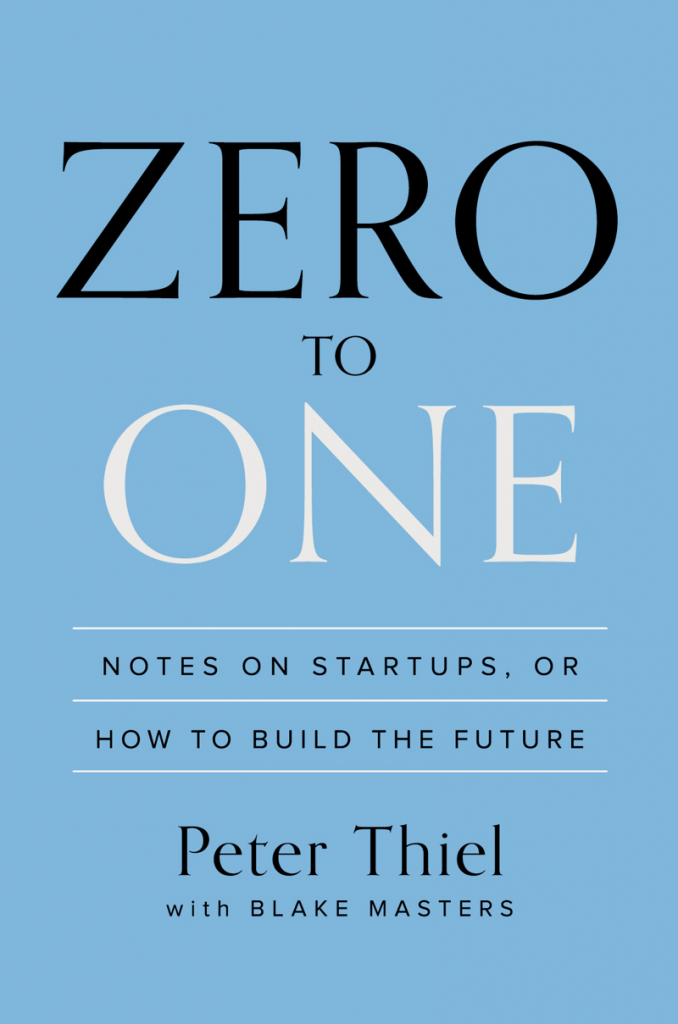 Zero to One, the business book authored by Peter Thiel, is a self-help manual meant for entrepreneurs. The book has been famous for its profound nature. It is also known as lucid in its articulation of success within the 21st century capitalist system.

The author is one of PayPal’s founders, as well as a founder of Palantir. He has donated to a biotech firm dedicated to reverse aging; a foundation which pays teens to abandon their college education to start new companies; and a group that has dedicated itself to the construction of underwater ocean communities – organizations that seem to have sprung from the books of Philip Dick. This idiosyncrasy partly inspired Peter Gregory’s character in HBO’s original TV show Silicon Valley. Whatever Thiel’s predilections may be, you cannot accuse him of thinking small.

Zero to One is short and simple, with barely 200 pages and written clearly, with many aphorisms sprinkled throughout. It is uncompromisingly thought-provoking as well, where Thiel declares that competition is only for losers, and that entrepreneurs must welcome monopolies. This is ingenious as a framing device, because it is controversial and arouses debate, but it is also commonsense that it makes incrementalists concede to its virtue.

On Capitalism and Business Monopoly

Thiel does not suggest that the capitalist system is bad. In fact, he says capitalism is good for the consuming public. It is only bad, in his view, for businesses. Competitive industries always have their profits eaten up by rival businesses as well as fickle customers. All start-up businesses should start small and should dominate small markets first. They must first create a small monopoly.

Zeroing In on the Smaller Crowds

The perfect market for start-ups to target is the small concentrated group of people served by just a few or even zero competitors. PayPal and Facebook, as an example, have been launched to small communities by power users. The latter are early adopters who tested their product, identified the bugs in the system, and helped in spreading the word as their company expanded.

Facebook started as an online Harvard yearbook, but how did it become so big that it is now worth $200 billion? Because Mark Zuckerberg first established fiefdoms of monopoly at the colleges before he expanded it to a worldwide market.

Thiel also adds that those who forget history are invariably doomed to repeat its mistakes, and that opposite principles are perhaps more correct. Start-up businesses should be audacious, with a clear plan to create a small monopoly. These businesses should remember that that sales matter equally with the product.

Thiel spent time in Stanford University before founding PayPal in 1988 with his friends. After 2 years, at the heels of the dot-com brouhaha, he moved to merge the business with Elon Musk, who also happened to launch an analogous company only blocks away. The dot-com crash caused an intellectual hangover in the technology sector.

Those who survived this deluge can credit their survival to four principles, according to Thiel. These are: 1) being humble and making incremental advances; 2) staying lean and experimenting agnostically; 3) not trying to suddenly build new markets; and 4) focusing on the products, not on the sales.

Misrepresentations and Other Stand Outs Discussed

Thiel also explains why nerds wrongly hate marketers. Nerds, according to him, have a wrong impression of sales, marketing, and advertising. They incorrectly see these as superficial, knowing that their own work is hard while they see salespeople just laughing with customers on the phone and having 2-hour lunches, and suspecting that no actual work was done. They are blinded by the relative complexity of engineering and science but do not see that it is hard to make selling look easy.

One can quickly realize the importance of marketing when some innovative invention is not effectively marketed. No matter how great your product may be, you will not profit from it and your business will suffer. In terms of distribution and sales, this is an example of the sneaky and simple wisdom that Thiel offers in his book that are absent in other business books.

The Book’s Limits and Knowledge Constraints

The book has its shortcomings. There are parts where Thiel has to deal with the limits imposed on his boundless optimism. Thiel also haphazardly blames the growth of America’s transfer spending solely on the sudden allergy developed by the government to future planning.

Unfortunately, most of the spending he alludes to, including Medicare and Social Security, were passed in the years between the ‘30s and the ‘60s, which Thiel hails as the period of apogee of technological daring. A more grounded explanation is that the US is simply growing old, like every other rich democracy.

Another shortcoming is building a success theory without also studying failure equally. Thiel passionately writes that skill outweighs luck. In contradiction, however, he also acknowledged how most risks taken by venture capitalists have failed.

Some venture capitalist bets get unequally large returns, but, Thiel says, to predict which will win and which will lose is next to impossible. To command entrepreneurs to defy the factor of luck is to ask one to defy the law of gravity. According to Thiel, success does not result from inherent privilege, but he does not seem to see that Silicon Valley is the epitome of cumulative advantage. Thiel is therefore preaching a success gospel based on a failed industry.

Not much in the book is discussed about what to do when your company takes a turn for the worse. It would also have been nice to read about PayPal’s success as a convenient payment system online instead of being a crypto currency. The book also fails to advise what to do in the interim between start-up and ultimate success.

Some of the gems of the book read much like a good humanist advice. These include treating founders as family; giving star employees only limited tasks; starting ambitious and yet dominating a small market; not to hate salespeople; and to focus on one corporate statement that will distinguish you from the rest of your competitors. Thiel’s book inspires entrepreneurs and serves as a genre inspiration as well. It ventured into an uncompetitive region and has proven its thesis. In other words, it created a small monopoly over other rival business books.