This is the beginning of a multi-part series on approaching business from the Infinite side of our nature. And the first really important question is motivation. Why is this something important to talk about?

Well, actually, the first question might be “what on earth are you talking about?”. So let’s go there first. It’s a bit challenging, though. I had a professor once who jokingly gave the following question on an exam: Define the Universe, give three examples. Strictly speaking, it’s impossible to do because anything you could say falls short in some way. (No, he wasn’t an astronomy professor, so don’t go there.) Even so, it’s useful to get our minds into the same general vicinity.

So what is the infinite side of our nature? Generally, it’s the stuff you can’t see, touch, or measure. Take intuition, imagination, or creativity for example. We can measure their results, but we can’t measure intuition or creativity directly. Or goodness, truth, and beauty. We sort of know what we mean when we say the words, but we don’t have strong definitions for them, despite centuries of trying by philosophers. Nonetheless, there’s something important here. To quote a Mark Twain character, “There’s gold in them thar hills.” But at the end of the day, it all arises from a place inside of us that we can’t describe or explain.

And now we can go back to the original question: why is this something important to talk about? To illustrate, let’s paint two pictures.

In the first picture, kind of like much of the business world today, talk of the infinite just isn’t done. There is a social pressure not to speak of it. So the language of business has been all about facts and figures and the bottom line. Even in creative businesses, such as magazines or advertising, where you might talk about the reader’s’ emotional response to an article or an ad, there is still very little room to talk about “the Infinite”, “source”, “spirit”, “god”, “energy mind”, “collective unconscious”, or (insert your own word here). Thankfully things are changing away from this first picture. We’re starting to talk about triple and quadruple bottom lines including not only profit but people, planet, and purpose. And yet, there is still very little room for the Infinite.

In the second picture, the Infinite is welcome in business — in boardrooms, offices, conference rooms, cubicles, manufacturing floors and waiting rooms. There’s an understanding, like it says in the Tao Te Ching, “you can’t know it, but you can be it”. People can talk about the value of heartfulness and others not their heads and chime in supportively. An employee can make an intuitive leap, take a risk, and be met with “ok, let’s try it out, and we’ll pick up the pieces together if it breaks”. An entrepreneur comes up with a great, but totally new idea, and the financiers look at the entrepreneur’s relationship with the Infinite as part of granting a loan because they understand that such a person often meets “with a success unexpected in common hours” [note]Henry David Thoreau[/note]

And there is the reason for talking about the Infinite in business. When we come from the infinite, although the finite side of things hasn’t literally changed, our businesses are suddenly more delicious, vibrant, flexible, and rich with possibility. 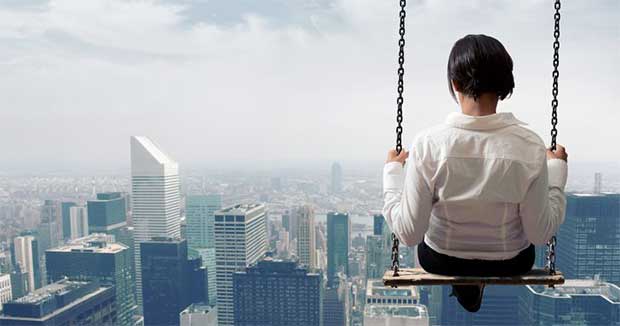